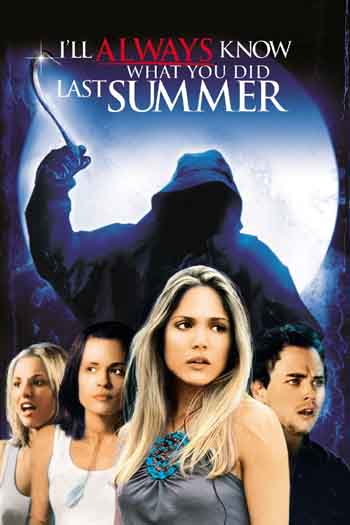 Story… A group of teenagers in Colorado find themselves being stalked and killed one by one by a mysterious figure with a hook, exactly one year after they covered up a friend’s accidental death.

Apparently it can. I don’t know why I decided to watch this movie, I think it was out of curiosity. I thought the first one was average, the second was terrible and I really did not expect much from the third (a STV sequel). Maybe I thought it would be one of those “so bad it’s good” slashers. No, it was a “so bad I would rather be castrated and burnt alive” slashers. This movie honestly had no redeeming values apart from being unintentionally hilarious. The acting from everyone was just bad, the story was a rehash of the first and second, the kills were unoriginal and the editing was vomit-inducing.

Five teens decide to pull a prank. Said prank does not go down so well for one of them, he dies. A year later, the four have *gasp* gone their own ways. Our lead girl gets 52 text messages which say *shock* “I know what you did last summer.” She decides to group up again and investigate and then one by one they are all killed off.

I’m not going to spoil the revelation of who the killer is, but let me tell you now, it is without a doubt the stupidest twist you will ever see. It is nonsensical and to me, quite funny. There isn’t much to say that hasn’t already been said, everything is crap. The worst being the editing, it is unbearable, like watching a music video.